The MV Oceania dives the areas of Kimbe Bay, the surrounding waters along the northern coast of New Britain such as the Witu Islands to the north west and Fathers Reefs to the north east, the channels between New Hanover and New Ireland (Kavieng area), Rabaul and South Coast New Britain.  For selected departures, MV FeBrina also travels to other dive areas in Papua New Guinea.

The areas Oceania dives are home to prolific and diverse marine creatures and corals.  Each area has it's speciality, and as most of our cruises cover at least two and often more destinations, we can offer many different types of diving in the one voyage.

Most diving is from Oceania's very well laid out dive deck, with easy access via the water level dive platform.Some of the reefs are current washed .... without current the spectacular marine life would not be there, however, the wide range of dive sites in each area means that it is not necessary to dive at a site if currents are unmanageable at the time. 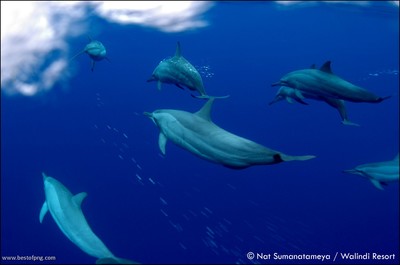 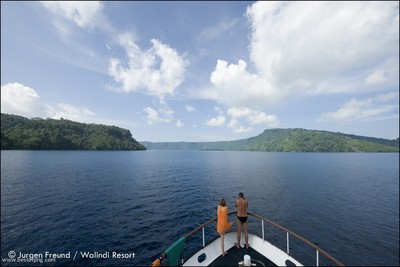 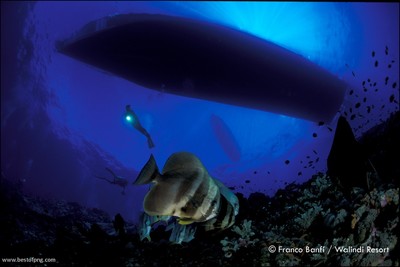 Whilst on board Oceania, guests will be diving on some of the most beautiful reefs and sea mounts in the Bismarck sea, with abundant fish life amongst picturesque and dramatic volcanically formed reefscapes. Papua New Guinea is located in the coral triangle, the centre of marine biodiversity which has the highest diversity of tropical fish and coral in the world.
Pristine and colourful corals are home to a variety of fish, crustacean and invertebrate life and many of the reefs have resident schools of barracuda, tuna and jacks. A range of shark species are regularly sighted, including hammerheads and silvertips, particularly on the offshore reefs. A resident pod of dolphins frequently entertains divers.
The occasional sightings of orca, pilot whales, whale sharks and other marine life passing through Kimbe Bay and West New Britain waters always delight both guests and staff.

MV Oceania will run a few different kinds of itineraries during the year to suit the weather patterns of each season.
The "Signature Itinerary" covers our three most popular diving areas of Kimbe Bay, Witu Islands and Fathers Reefs. MV Oceania will operate 10 and 9 night Signature itineraries in our ‘peak' weather months, from mid-September, October and November along with April, May and June.  Water temperatures are slightly lower in September, October and November and that means there are usually more of the smaller and unusual critters about.
Water temperatures are usually 29/30 degrees celsius in the later months, and up to 31 degrees in April and May. There is usually very little rain in October & November (there is a possibility of a couple of evening showers here and there), light breezes and plenty of sunshine.
The "Mid Year" itineraries usually operate through June, July and August and are shorter in duration with each trip being around 8 days. This itinerary visits 2 dive areas including Kimbe Bay Reefs and either Fathers Reefs or Witu Islands.
During late November and early December we offer a Witu Islands Itinerary, visiting Kimbe Bay Reefs and the pretty coral reefs and black sand bays of the Witu Islands.
Throughout the year MV Oceania will offer occasional specialist itineraries within the Bismarck sea and further afield. Don’t hesitate to get in touch with our friendly reservations staff to find an itinerary that suits you.
The Witu Islands, to the north west of Kimbe Bay, are a remote group of islands with a wide variety of dive types to visit. The islands and reef are of volcanic origin and rise from very deep water. Garove Harbour is actually a submerged volcanic crater. Nutrient rich currents frequently waft across most reefs and as a result there is a profusion of life. Schools of pelagic fishes abound on the world renowned Lama Shoals, a sea mount rising to within 15 feet of the surface from the surrounding deep waters.

Fathers Reefs, to the north east of Kimbe Bay along the northern coast line of New Britain, are a series of off shore reefs, which are the sunken remains of a huge extinct volcanic caldera. The reefs have interesting topography with swim throughs and arches adorned with soft corals and other sea life. Being offshore, these reefs attract many pelagic species including shark, tuna, barracuda, turtles and rays, which all come in to feed off the prolific reef fish and other invertebrate species that have settled here.

Rabaul and the South Coast of New Britain are a critter lover's heaven. White sand beaches and uninhabited tropical islands stretch along the Southern coastline of the island of New Britain, with rainforest coming right down to the waters edge. There are some drift dives in the channels created between the islands, however the speciality of this region is the amazing variety of rarely seen and unusual critters.


Contact us for up-to-date availability cb@bestofpng.com
Copyright © Best of PNG. All rights reserved.  ​Best of PNG is a subsidiary of Indigo Safaris Ltd.