Standing majestically on a lone ridge, 300 meters above the banks of the Karawari River and overlooking an endless expanse of dense tropical lowland rain forest is Karawari Lodge.

One of the most remote and un-spoilt destinations in Papua New Guinea - the lodge's private airstrip and the Karawari River are the only way in or out. Stilted villages line the edges of flooded waterways and dugout canoes are the primary mode of transport.

There are no roads, no shops and no phones. Sepiks live completely off the land, weaving baskets for catching fish; gathering, preparing and cooking their staple food from the Sago Palm.

Karawari Lodge arranges river excursions in 18-seat motorized jet boats to the surrounding villages where you visit traditional homes, witness ceremonial dances and celebrations and are honoured with a glimpse of what life must have been like.

Sepiks express their culture and beliefs through their art, inspiring the carving of incredible masks, drums, baskets and sculptures that integrate with their daily life and animist beliefs. Village tours allow you to observe master carvers at work and purchase from a selection of finely hand-crafted artifacts.

This tropical lowland rainforest is one of earth's most complex of habitats, housing an immense variety of flora and fauna - a staggering 229 different bird species have been recorded at Karawari. Optional birding cruises are available with opportunities to spot elusive 12-Wire Birds of Paradise, cockatoos, parrots, hornbills, cormorants and other water birds. Lists of the birds and orchids available on request via e-mail.

Guests are accommodated in ten separate cottages, each built out of local bush materials and inspired by traditional architecture. Each cottage has two private twin rooms, each with modern en-suite bathrooms, and a communal veranda. Despite its remoteness, the lodge has 220V electricity, hot & cold water, comfortable mosquito-netted beds, ceiling fans, and a breezy veranda - all make for a welcome sanctuary after a day's exploration.
​
The dining and lounge areas, "Puk Puk" Bar and a vast collection of Sepik artifacts are housed in Karawari's main lodge building, designed and built in the form of a traditional "haus tambaran" or spirit house. The awe inspiring view at dusk has to be experienced  to be believed and while contemplating the  vast expanse of jungle as the setting sun  colours the clouds, one could almost believe that the world was born yesterday. For the more adventurous, overnight stays in nearby traditional villages are also available from Karawari Lodge as part of a longer tour. 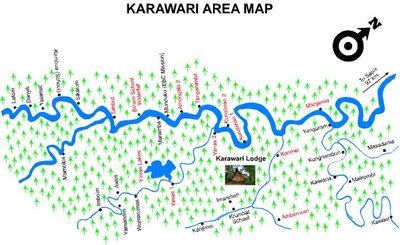 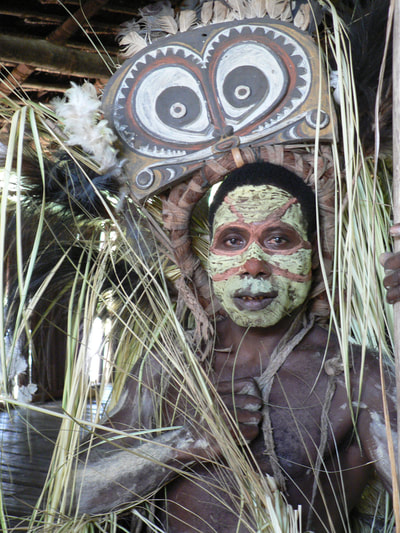 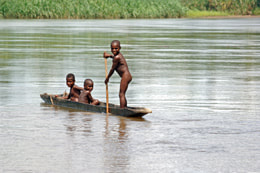 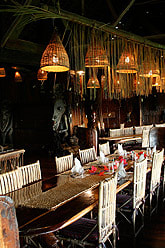 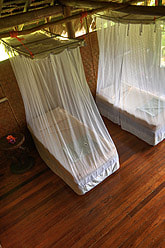 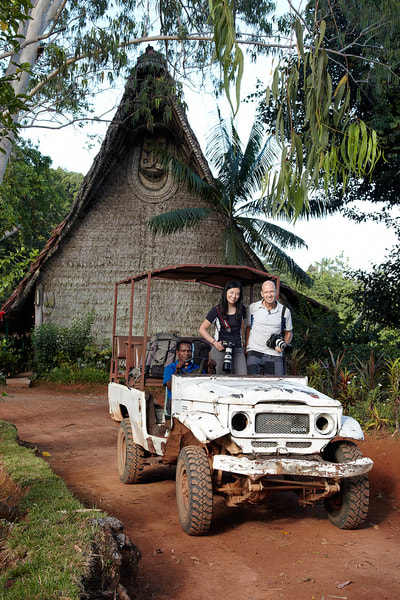 The people of this ecologically diverse region speak more than 250 languages and are knitted together in systems of trade and cultural interaction. Ritual, genealogical and historical knowledge defines one group from another and maintains the distinctions that facilitate trade.

Life in the Sepik area revolves around the river, with men paddling narrow dugout canoes full of goods for trade, women fishing or making sago and children joyfully swinging from trees to splash down in the river. The Sepik is a gallery of tribal art, each village boasts a unique style and every villager is an artisan.

Head hunting was a river culture practice in the Sepik area. The fact that young men could only come of age in these regions by taking a head, suggests how incessant warfare must have been. The Iatmul people of the Sepik would take the heads in battle, boil away the flesh and hang the painted and decorated skulls as trophies in the men's houses. The head hunters were not necessarily cannibals, but many were. Human flesh was eaten until fairly recently and some of the older men from villages remember tasting it as  children, they will tell you that it tasted a little bit like chicken.

The men's house is the place where important decisions regarding the village are made, where boys are initiated and become men and ceremonies to please the spirits are performed. Here the crocodile is worshiped as the water spirit. In excruciatingly painful ceremonies young men have their backs cut to resemble the markings of the crocodile, which is a symbol of strength and power.

Access
Karawari Lodge is only accessible by light aircraft with flights departing from either Mount Hagen or Ambua Lodge on Mondays, Wednesdays, and Fridays. Flights are $523 each way between the lodge and either Ambua Lodge or Rondon Ridge near Mount Hagen. Flights to Mt Hagen on Air Niugini start at $200 one way. Charter flights from other departure points can be arranged.

Copyright © Best of PNG. All rights reserved.  ​Best of PNG is a subsidiary of Indigo Safaris Ltd.