Nestled amongst the Doma Peaks near Tari, almost 7000 feet above sea level, is Ambua Lodge. An award-winning, eco-friendly lodge boasting magnificent views of the Tari Valley below.

Tari is home to one of the most immediately recognizable cultures in Papua New Guinea - the "Huli Wigmen". A proud, flamboyant tribe known for their ornate ceremonial "wigs" with dances and songs fashioned on that of the mating rituals of the Birds of Paradise - an encounter with the Huli's is bound to be memorable.

Life for the majority of villagers around Tari remained mostly unchanged until the turn of this century. Discoveries of natural gas and mineral reserves over the last few years have brought about a sudden and unexpected increase in wealth and led to a hive of economic and commercial activity, thrusting Tari into the 21st century in a matter of a few short years. Social, tribal and ancestral beliefs and dynamics, once embedded so deeply, are being rapidly forgotten and replaced by more "rewarding" and modern pursuits. Tari today, however, is one of the few remaining areas where men and women still adhere to many of their traditional beliefs and where a man's wealth and importance is still measured by his amassing of pigs, wives and land.

Ambua arranges culturally based excursions to nearby Huli villages where one learns about and observes everyday life of the Huli's, as well as the peculiarities of their traditions and beliefs. Guests tour in comfortable Toyota Hi-Ace and Coaster buses and are accompanied at all times by experienced and knowledgeable Huli guides from the local area, so as to make the experience all the more educational and rewarding. Private touring is not possible at Ambua. 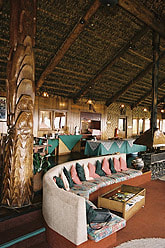 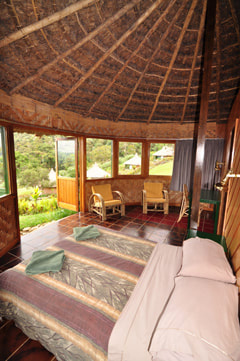 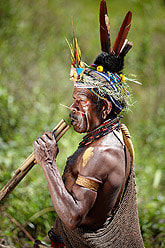 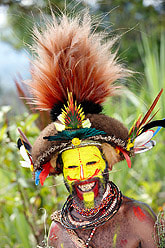 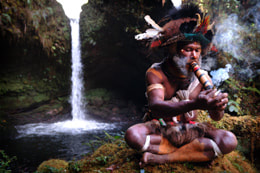 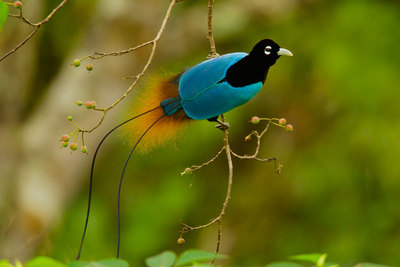 The Huli clan call the Southern Highlands of Papua New Guinea home. They regard themselves as one people descendant from a male ancestor called Huli. He is said to be the first man who gardened on Huli territory. Pigs are the Huli's main exchange commodity and they are often used to pay for bride price, death indemnities as well as ritual payments.

Ambua is the Huli word for yellow clay. This clay is sacred in their culture as is the red ochre clay and sets the Huli warriors apart from all others with their unique and colourful traditional body decoration.

Unmarried Huli men prepare themselves for adulthood in a unique way. They enter a school for bachelors for a period of between roughly 18 months to 3 years where they receive instruction on the biological and ritual process of masculinization. The young males are separated from their mothers and all women for much of this period and when they aren't, they are absolutely forbidden from physical contact with any female. Sexual contact in particular would contaminate their stores of male essence.

The southern highlands are the home of the renowned Huli Wigmen. Special magic and a restricted diet help build a boy into a man and make his hair grow strong and fast. Under the guidance of the cult expert, the boy's hair is picked out and periodically splashed with ritual water until it is long enough to be shaped by a circular band of bamboo into what looks like a mushroom of hair. Eventually this band is replaced by an oblong one creating an effect something like a toreador's hat. Throughout this period the boy sleeps on a headrest that prevents his hair from being squashed. After roughly 18 months the entire coif is clipped off close to the scalp and reformed to create the basis of the renowned Huli ceremonial wig. Iridescent blue Superb bird of paradisebreastplates and parrot feathers are then added and in some locations the wig is also encased in red ochre. Great trenches, up to five metres deep, criss-cross the floor of the Tari Basin. These huge inter-connected channels, dug by hand with simple digging sticks, define family boundaries, control their pigs and guard against enemy intrusions. The Huli, clearly do not live in peace.

There are no Huli "chiefs" in the hereditary sense, all leaders come to power through their ability at war, skill in mediating disputes and by amassing wealth in pigs and shells. Warfare is never ending within the Huli culture. Vengeance is preferred to any peaceful settlement and when a person returns one injury with a greater one, his victim normally seeks counter vengeance rather than accept this as justice. Most Huli wars originate from personal disputes between individuals, with alliances centering on the issue and its main protagonists. Even today, the Tari Valley in the Southern highlands of Papua New Guinea has a real frontier atmosphere.

A favoured destination amongst birders, Ambua's rain forests have been the star of many a wildlife documentary. An incredible 217 species have been recorded here and Ambua is home to 13 different species of Bird of Paradise. Ambua employs knowledgeable local birding guides and caters for all interest levels, from early morning birding excursions for guests on more culturally orientated tours, keen to catch a glimpse of these spectacular birds; to fully specialized birding tours tailored to the seasoned enthusiast.

Guests are accommodated in forty round houses, set amongst landscaped gardens and built almost exclusively from natural materials. Each unit features 180 degree picture windows to soak in the view, en-suite bathrooms. Electric blankets and continental quilts for the cool highland evenings.

Ambua has 24 hour, eco-friendly electricity, provided by its own hydroelectric power plant that generates clean, natural energy from a nearby mountain stream. The main lodge building houses the bar, dining and lounge areas and a cozy central fireplace.

Ambua is accessible via TN Air from either Mount Hagen or Karawari Lodge on Mondays, Wednesdays and Fridays for $523 or with Air Niugini on their scheduled services between Port Moresby and Tari approximately $850 return)

​
Rates
Copyright © Best of PNG. All rights reserved.  ​Best of PNG is a subsidiary of Indigo Safaris Ltd.